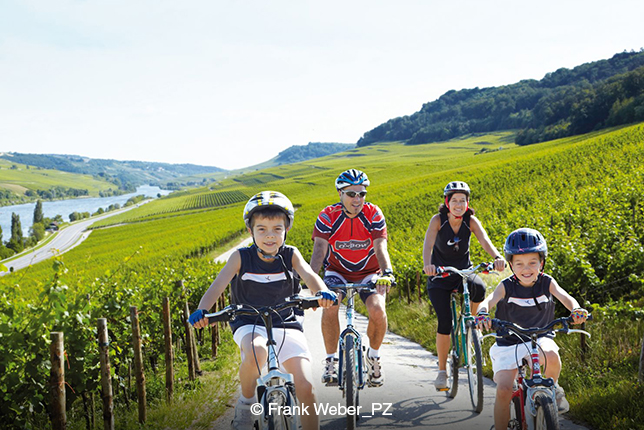 In front of the station, take the cycle path to the city center, via the Avenue de la Gare. After crossing the bridge, cross the street at the traffic lights, just above the parking St. Esprit. Then turn right towards an octagonal tower.

At the back end of the adjacent courtyard of the judicial court, take the elevator to the quarter “Grund”. At the exit of the elevator, ride straight to cross the bridge over the Alzette, and turn right into the national cycle path PC1 Piste cyclable du Centre.

In direction of Hesperange, this cycling tour, through the idyllic Alzette river valley, offers a pleasant change, compared to urban Luxembourg-City.

In Hesperange, you ride through the municipal park and after the camping, leave the cycle path PC1 by turning left to join the main road and cross it in direction of Syren.

If you ride without a GPS navigation, the LBC-maps are useful, due to an incomplete signposting from Hesperange to Hassel. From Hassel to Ellange the itinerary is signposted by road markings.

At Ellange, take to the left opposite to the church into the rue du Cimetière in direction of Ellange-Gare. Cyclists then follow the PC7 Piste cyclable Jangeli on the winding track of the former narrow-gauge railway “Jangeli” until reaching Remich on the Moselle shore.

In order to get to Wasserbillig, the final destination of this trip, the PC3 Piste cyclable des Trois Rivières takes cyclists downstream along the Moselle river with its winemakers' villages and vineyards.

At the Moselle border, the station can easily be reached by an underground passage, which avoids the main road.