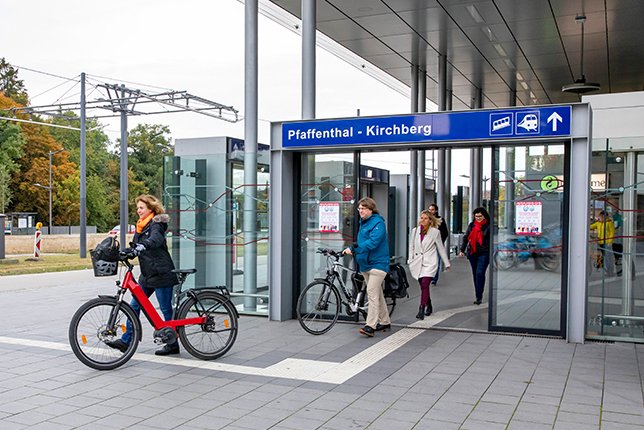 You leave the station by funicular through the Kirchberg exit and take to the left. On the national cycle path PC2 Piste cyclable d'Echternach you first cross the Kirchberg plateau, the european district of Luxembourg, characterised by its contemporary architecture.

After the third tram stop « Parlement Européen » that you pass by, turn to the left into rue Erasme, to follow PC2. After the downhill from Senningerberg, the variant PC2 to the right side “via village de Hostert” is recommended.

Then, follow an ancient Roman road (Kiem) and the former narrow-gauge railroad track of the “Charly” line towards Ernster. There you turn right to PC4 Piste cyclable de la Syre in the direction of Olingen and Betzdorf.

From Wecker onwards, the tour turns increasingly hilly which is, however, rewarded with some very nice panoramic views, before continuing down to Mertert, into the Moselle valley. In Mertert, the itinerary joins the PC3 Piste cyclable des Trois Rivières and follows the Moselle river banks to Wasserbillig.

At the Moselle border, the station can easily be reached by an underpass. In this way the main road can be avoided.