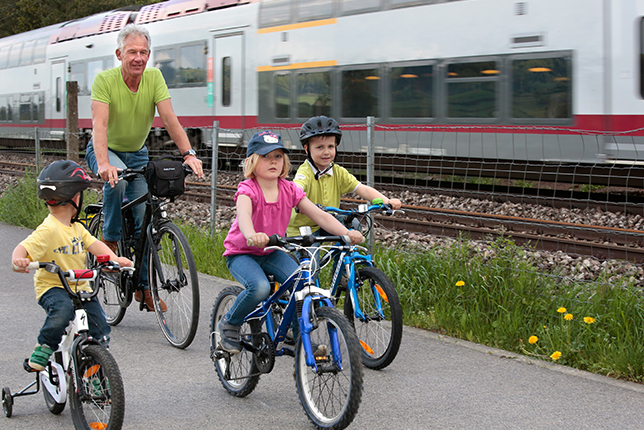 At the main station plaza, take the municipal cycle paths network in direction of  Belair to the main entrance of the cemetery in Merl-Belair, situated at the crossing of rue des Aubépines and rue Val Sainte Croix (see enlarged section of the map). Then, follow the PC1 Piste cyclable du Centre in direction of Strassen.

At the end of rue du Kiem, in front of an old farm,  cross diagonally into rue des Romains, which is the starting point of the PC13 Piste cyclable Nicolas Frantz, which, heading straight west, takes you to Mamer.

The path is named after double Tour de France winner Nicolas Frantz, born in Mamer. The itinerary includes a section of the ancient Roman road Kiem, which once connected Reims (F)  to Trier (D) via Luxembourg.

Behind the railway station in Mamer, turn left over the bridge to the main street.

After Garnich, the PC13 ends and leads into the PC12 Piste cyclable de l'Attert. At this junction, go straight in the direction of Hagen, over the highway bridge. 700m after the underground passage, you leave the PC12 at the  junction with a location plan by turning left and then, following the railway tracks on your right you arrive in Kleinbettingen. After passing the inner courtyard of the Moulins de Kleinbettingen, you turn left into the main street towards the train station.